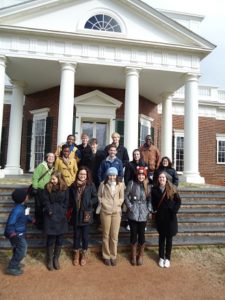 On February 11, 2012, thirteen students plus three faculty members ventured out to Monticello, the mountaintop home of Thomas Jefferson, the third president and author of the Declaration of Independence, just outside Charlottesville. Sponsored by an NEH Enduring Questions grant, Professor Lahra Smith, Assistant Professor in the SFS, created this field trip as an essential component of her INAF-248 seminar, “The Question of Equality: Literature and Political Theory in the Africa and the West.” Tracing the European and philosophical notions of equality, this class prompts students to ponder the unending question of what “equality” truly means. In addition, it explores the intersection of normative political theory with cross-cultural conceptions of equality, in hopes of bridging American notions of equality to a more global understanding.

The field trip to Monticello presented a perspective of Thomas Jefferson that triggered much discussion about his abolitionist stance on paper as opposed to his duties as a plantation owner. Upon arrival, students watched a twenty minute video outlining the life of Thomas Jefferson and the instrumental effect he had on equality and future revolutions. Afterwards, they took a shuttle up to his estate for a tour of his residence. While the tour relayed much insight into the architectural phenomena of Monticello and the ingenuity of Thomas Jefferson, it also prompted many to question the ideologies of this legendary figure and the historical and cultural circumstances that juxtaposed his ideal of enlightment. While the Declaration of Independence was a revolutionary and progressive document of the time, the existence of American slavery posed a grave challenge to the manifestation of the notions of equality. All in all, the Monticello exhibit served as a great foundation to continue these discussions in our seminar on equality and its historical development, creating a clear distinction between the philosophy of equality and its practicality.

This field trip is part of an NEH grant to support a new course entitled “The Question of Equality: Literature and Political Theory in Africa and the West” taught by Professor Lahra Smith (SFS) and Professor Samantha Pinto (English).